And Now For Something Completely Different: For Honor and one other announcement

After a multi-month hiatus I'm back here posting again. I'm going through a bit of a writer's block on my magitech project, but I'll work on each post day by day until I feel confidant enough to post them. With that said I've recently found a few more things to keep my interest until I get back to work magitech in fiction. Like the YouTube footage of/trailers for For Honor. For Honor is a new third person action game by Ubisoft. The game has three main factions knights (your typical Western medieval warriors), samurai (medieval Japan) and vikings (well, vikings). 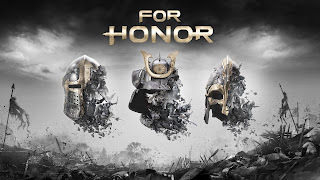 What's so special and interesting about this game, in my opinion, is the guard system. Under the guard system the position you hold your sword, or other weapon, in determines which direction you'll attack and defend in. Just watch this playthrough to get it, it does a much better job of explaining the combat system than I can.
I'm posting about this mostly because I find the combat system interesting, and I'm trying to adapt the guard/weapon positions to table top and or my D&D hybrid. Feel free to try doing that for your own games. Oh, by the way, when I say this game is new, I meant that it's coming out next year. I guess that counts as new. I'm also starting up my own wikidot wiki under the name The Good_Necromancer. I'll be using it mostly for house rules, class rewrites and character stats. That's really all I have to say now.
Posted by Unknown at 2:32:00 AM